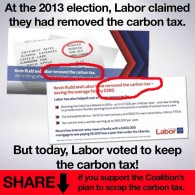 Labor has joined forces with the Greens in the Senate and voted to keep the Carbon Tax.

In the West Australian yesterday, Labor’s Senate candidates claimed that, “Labor is scrapping the Carbon Tax”. This is blatantly false.

“Let there be no mistake, Labor has voted with the Greens to keep the Carbon Tax in place,” Mr Sukkar said.

“Labor told people on the one hand that they were scrapping the Carbon Tax, then only a few short hours later in Canberra voted to keep the Carbon Tax in place”.

But this is not the end. The Coalition Government will not stop until the Carbon Tax is abolished.

“There should be no doubt about our determination to get rid of Labor’s painful yet pointless tax,” Mr Sukkar said.

“The people of Deakin can blame Bill Shorten for making the cost of living significantly higher than it needs to be”.

“Bill Shorten should be ashamed of what his party has done. People in Deakin should remember that Labor has zero respect for the will of the Australian people.”