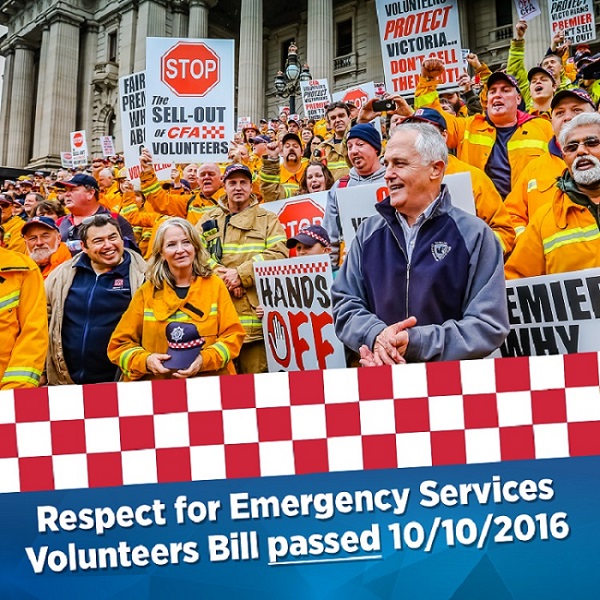 Coalition Government delivers on promise to protect the CFA

The Turnbull Government has stood up for our communities and the tens of thousands of Victorian volunteers who protect us.

“We have delivered on our commitment to protect the Country Fire Authority from a hostile union takeover”, Michael Sukkar, Federal Member for Deakin has said.

On Monday, the Coalition passed the Fair Work Amendment (Respect for Emergency Services Volunteers) Bill 2016, with the assistance of a majority of Senate crossbenchers.

This will mean an enterprise agreement can no longer be used to undermine the capacity of emergency services bodies to properly manage their volunteers and operations.

Michael said: “This is a victory for men and women who have fought to defend the CFA and the role of its volunteers. For seventy years, CFA volunteers have protected Victorian communities. Now we have taken action to protect them.”

The CFA is one of the largest and most effective volunteer-based emergency services organisations in the world, but in recent months it has faced huge uncertainty.

“From interfering with the CFA’s chain of command, to specifying that volunteers and paid firefighters must wear different uniforms, the proposed agreement would have undermined the ability of volunteers and paid staff to work together”, Michael said.

The CFA’s leadership was so concerned with what the Victorian Government is trying to do, that the Chief Executive and Chief Officer resigned, along with Labor’s Emergency Services Minister, Jane Garrett. The CFA Board refused to approve the agreement, so were sacked.

“What we have seen in recent months was a shameless power grab by the union, endorsed by Premier Andrews and defended by Bill Shorten.

“What Labor underestimated was our community’s support for the CFA. I have listened to the concerns of volunteers and seen their passion on this issue.

“The Turnbull Government made a commitment that if re-elected, we would protect those who protect us. This week, I am proud to say we have delivered on that promise”, Michael said.