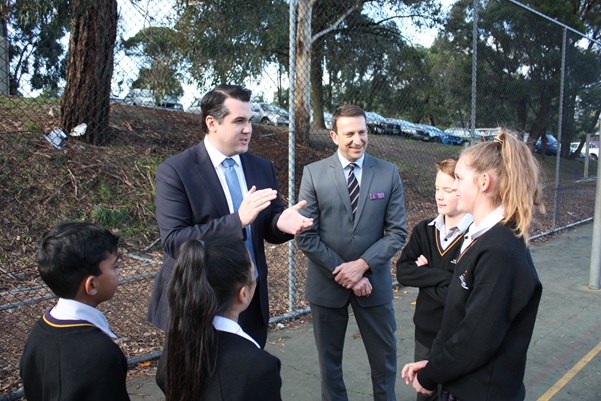 Michael Sukkar, Federal Member for Deakin, today delivered good news at Norwood Secondary College, confirming that the Coalition Government has officially approved $1.6 million in funding for the construction of a new sports stadium.

Mr Sukkar met with Norwood Secondary College Principal Andrew Sloane and a group of students to discuss the exciting project.

“Structural plans for the stadium have been completed and construction is set to begin in November,” Mr Sukkar said.

“The Coalition has approved $1.6 million in funding and signed a funding agreement so that this important project can get under way.

“As an avid basketballer, I would be ecstatic at the prospect of being able to play on new courts.

“The facilities will benefit both the school and Ringwood Hawks Basketball Association.

“I’m committed to helping ensure that Deakin’s schools have the best facilities in the state. Our students deserve the best.”

“We’re very grateful to Michael for securing Federal Government funding for the project, which will make a big difference to our school,” he said.