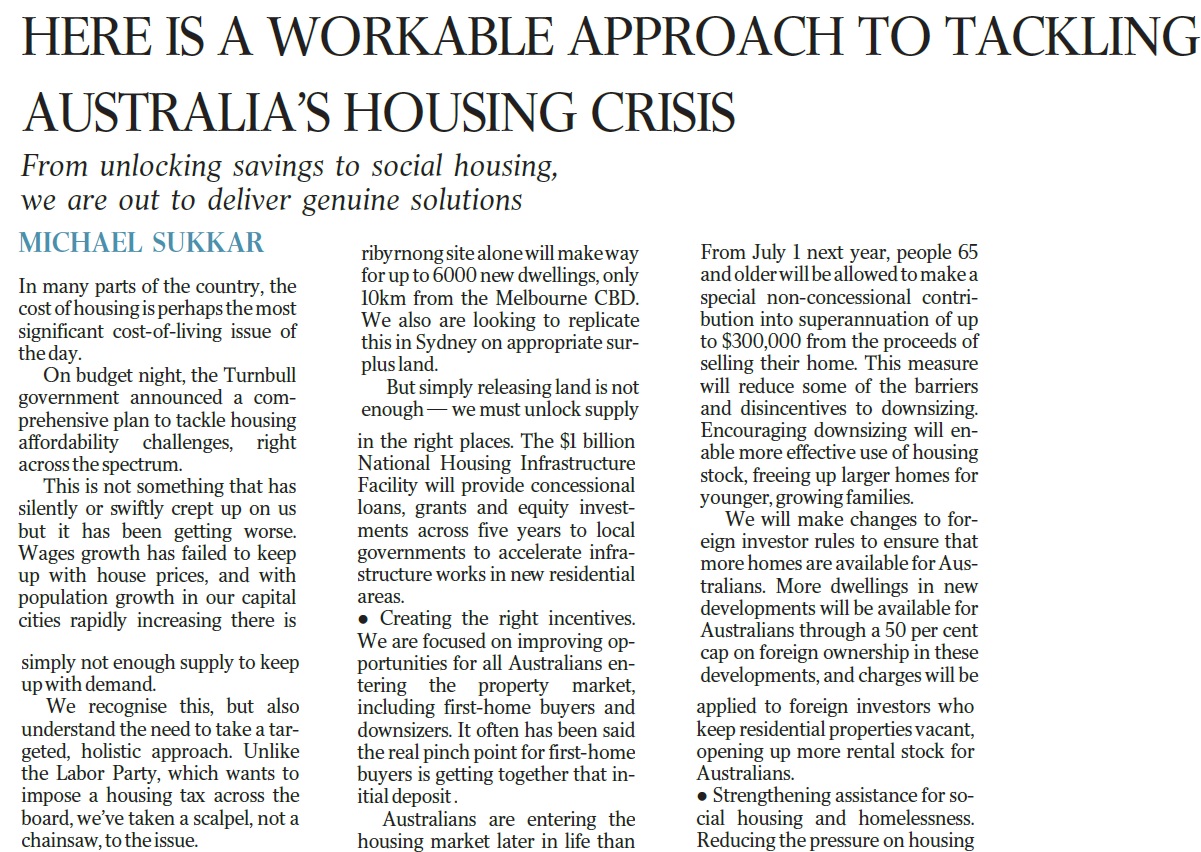 Here is a workable approach to tackling Australia’s housing crisis

In many parts of the country, the cost of housing is perhaps the most significant cost-of-living issue of the day.

On budget night, the Turnbull government announced a comprehensive plan to tackle housing affordability challenges, right across the spectrum.

This is not something that has silently or swiftly crept up on us but it has been getting worse. Wages growth has failed to keep up with house prices, and with population growth in our capital cities rapidly increasing there is simply not enough supply to keep up with demand.

We recognise this, but also understand the need to take a targeted, holistic approach. Unlike the Labor Party, which wants to impose a housing tax across the board, we’ve taken a scalpel, not a chainsaw, to the issue.

While state, territory and local governments pull most of the levers that affect housing affordabil­ity, the commonwealth can play a part. Our plan works in three areas:

Labor’s grab-bag approach to housing will see not one new house built, while our policies will substantially increase the amount of stock in the market.

The commonwealth will release under-used land, including Defence land in Maribyrnong in Victoria, to unlock new areas for residential development. The Maribyrnong site alone will make way for up to 6000 new dwellings, only 10km from the Melbourne CBD. We also are looking to replicate this in Sydney on appropriate surplus land.

But simply releasing land is not enough — we must unlock supply in the right places. The $1 billion National Housing Infrastructure Facility will provide concessional loans, grants and equity investments across five years to local governments to accelerate infrastructure works in new residential areas.

We are focused on improving opportunities for all Australians entering the property market, including first-home buyers and downsizers. It often has been said the real pinch point for first-home buyers is getting together that initial deposit.

Australians are entering the housing market later in life than previous generations.

From 2009-10 to 2013-14, the proportion of first-home buyers aged over 45 increased from 8 per cent to 14 per cent. Analysis suggests it takes a two-income couple more than eight years to save for a 20 per cent deposit in Sydney and more than six years in Melbourne.

From July 1, first-home buyers can save for their first home inside superannuation. Through the First Home Super Savers Scheme, Australians will be able to salary sacrifice contributions of up to $15,000 a year and $30,000 in total within existing contributions caps.

These contributions, along with earnings, net of tax, can be withdrawn for a deposit.

We also are supporting older Australians wanting to downsize. From July 1 next year, people 65 and older will be allowed to make a special non-concessional contribution into superannuation of up to $300,000 from the proceeds of selling their home. This measure will reduce some of the barriers and disincentives to downsizing. Encouraging downsizing will enable more effective use of housing stock, freeing up larger homes for younger, growing families.

Reducing the pressure on housing affordability also means addressing challenges faced by those who rely on community and social housing, as well as those suffering homelessness. Ensuring the most vulnerable in our community have a roof over their head must be a key priority.

We have identified deficiencies in the National Affordable Housing Agreement model and are committed to working with state and territory governments to negotiate agreements that are tailored to individual issues affecting each jurisdiction.

We also have committed to provide $375 million across three years from 2018-19 through the new National Housing and Homelessness Agreement, providing certainty to frontline ser­vices that help Australians who are homeless or at risk of becoming homeless. We will deliver more certainty to providers of social housing and homelessness services. A National Housing Finance and Investment Corp will be established to administer an affordable housing bond aggregator, providing cheaper and longer-term finance to these housing providers.

Our plan will deliver a targeted and holistic approach to housing affordability challenges, enhancing economic and social outcomes for all Australians.

Michael Sukkar is the Assistant Minister to the Treasurer.