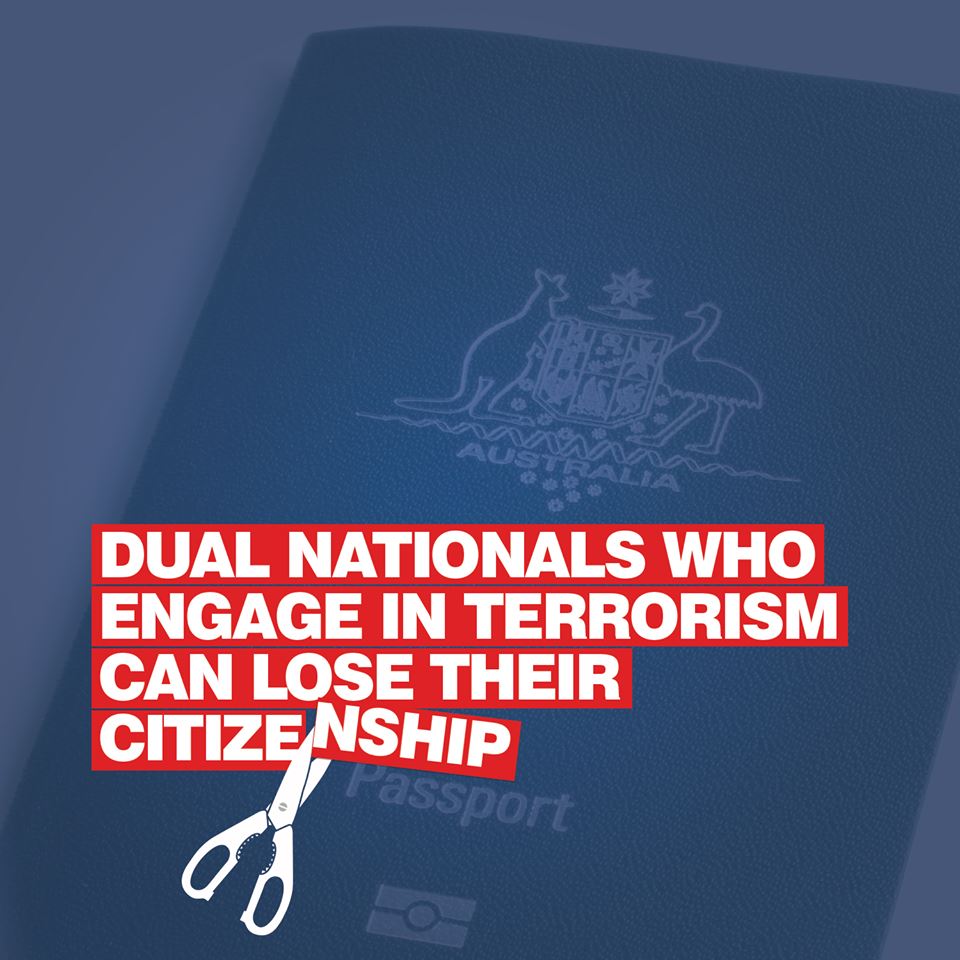 The Coalition Government will update the Australian Citizenship Act 2007 so dual-nationals who engage in terrorism can be stripped of their citizenship.

The Minister for Immigration and Border Protection will be able to exercise these powers in the national interest where a dual citizen betrays his or her allegiance to Australia by participating in serious terrorist-related activities.

“These new powers will apply to dual citizens who fight with or support groups such as ISIL, or Daesh, as well as so-called ‘lone wolves’ engaged in terrorist acts, whether in Australia or on foreign soil,” said Michael Sukkar, Federal Member for Deakin.

“These new powers are a necessary and appropriate response to the terrorist threat, which bring our laws closer to those of the UK and other countries.”

The changes will be consistent with our international legal obligations not to leave a person stateless and decisions will be subject to judicial review.

“Since 1949, Australians with dual citizenship who fight for a country at war with Australia forfeit their citizenship under existing law.  In the current age, there should be no difference in how we treat Australians who join a hostile army and those engaged in terrorism, as both are betraying our country and they should forfeit the privilege of being an Australian citizen,” said Michael.

“Regardless of how we gain our citizenship, it is an extraordinary privilege with rights and responsibilities for all of us.”

The Prime Minister has also announced that the Government will launch a national consultation regarding the privileges and responsibilities of Australian citizenship.

This consultation will be led by Parliamentary Secretary, Senator the Hon Concetta Fierravanti-Wells, and the Hon Philip Ruddock MP.

Mr Ruddock will undertake this task as the Prime Minister’s Special Envoy for Citizenship and Community Engagement.

“Our success as a nation is underpinned by a commitment by all Australians to a law-abiding, peaceful and open society. In an environment in which terrorism is reaching out to our community, we need to ensure this is well understood,” Michael said.

“A national conversation about citizenship will enable us to consider whether the rights and responsibilities of citizenship are well understood and how we can better promote these, including among young Australians.”

The consultation will seek the public’s views on the value of citizenship and further possible measures, including the suspension of certain privileges of citizenship for those involved in terrorist activities.

A consultation paper on Australian citizenship and further information on the submission process can be found at www.citizenship.gov.au.