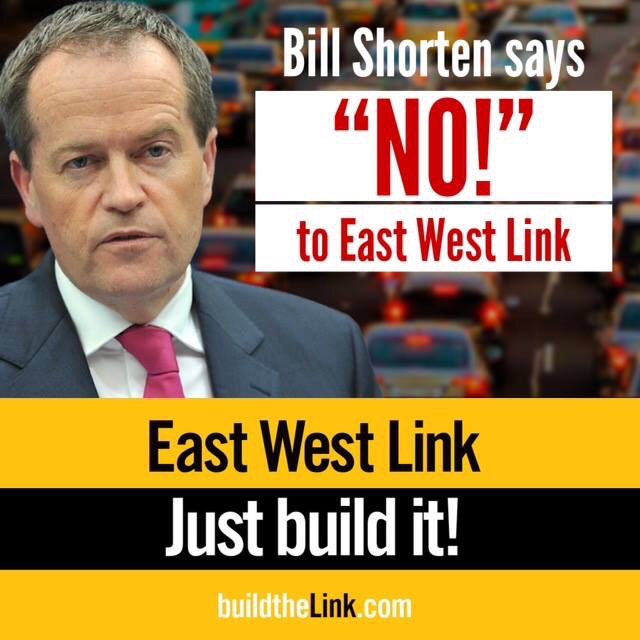 The Leader of the Opposition, Bill Shorten, has backflipped on his support for the East West Link, confirming that he now supports Premier Dan Andrews tearing up the contract and paying up to $1 billion not to build the East West Link.

As National Secretary for the Australian Workers Union, Bill Shorten trumpeted the economic benefits of the East West Link, including job creation, massive improvements to freight and logistics, and urban renewal.

But all that Mr Shorten once held true and sacred has been betrayed, because he fears an electoral backlash from the Greens in Labor’s inner-city Melbourne seats.  Mr Shorten and Labor are abandoning Melbourne’s eastern suburbs, particularly residents in Deakin.

At a time when family households and businesses in Deakin are coming to terms with Labor’s record debt and deficit, Shorten and his Victorian Labor mates are prepared to throw away billions of dollars in compensation not to build the East West Link, which Mr Shorten once said would allow the lifeblood of the Victorian economy to flow.

Both Bill Shorten and Victorian Premier Dan Andrews are on the record as saying that good governments honour contracts and do not threaten business confidence by dishonouring those contracts.

Yet again, Mr Shorten and Mr Andrews say one thing but do another.

They say they want to create jobs, but now risk 7000 new jobs. They say they want to invest in infrastructure and transport, but are ready to rip up a shovel ready project, which will reduce travel times for Deakin residents by up to three hours per week, and get the economy moving.

Prior to the last federal election, I fought hard to have the Commonwealth Government commit $3 billion to build the East-West Link.  Local residents in Deakin, who voted for the East West Link, expect and deserve my advocacy for this vital infrastructure project.

I will continue to fight for the best interests of Deakin residents, while Labor panders to a loud minority of inner-city Greens supporters.

Deakin residents can support my campaign to build the East West Link by signing the petition at buildthelink.com.au or contacting my office directly.