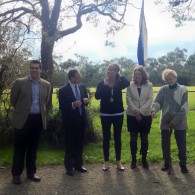 A Coalition Government will invest in the rehabilitation of Eastfield Park in Croydon, Michael Sukkar, Liberal Candidate for Deakin, announced today.

The Shadow Minister for Climate Action, Environment and Heritage, joined Mr Sukkar to make the announcement that a Coalition Government will undertake a major rehabilitation project in Eastfield Park as part of its commitment to build a 15,000 strong Green Army nationwide.

The Eastfield Park Rehabilitation Project will include weed removal, tree planting and landscaping, the construction of paths, the erection of signage, and improvements to park furniture and facilities.

Mr Sukkar and Mr Hunt visited Eastfield Park in January to meet with representatives from Maroondah Council and local residents to discuss a potential project.

“Eastfield Park is the largest area of continuous open space in Maroondah and I am very pleased to announce this project as a key priority for a Coalition Government,” Mr Hunt said.

“The Green Army will make a real, practical difference to enhancing the environmental value of the park for the benefit of the community who enjoy spending time outdoors there.”

“Eastfield Park is a beautiful spot that links with numerous bike trails and Tarralla Creek and provides a wildlife corridor that must be protected for future generations,” Mr Sukkar said.

“A team of young environmental trainees will work to address problems with the dumping of rubbish and weed infestation, and they will revegetate the park with native plant species to encourage the creation of wildlife habitats.”

“I am excited about this project, which I believe will both rehabilitate the park and reinvigorate our community to make the most of the valuable environmental resource on our doorstep.”

The Coalition’s policy to build a 15,000 strong Green Army is part of our Real Solutions Plan to build a strong, prosperous economy and a safe, secure Australia.