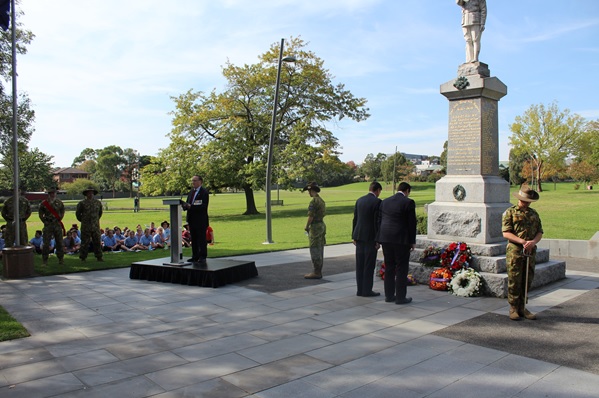 Michael Sukkar, Federal Member for Deakin, said the Deakin community will pause on Anzac Day to honour the service and sacrifice of all Australian men and women who served in defence of our country.

Mr Sukkar said Anzac Day is one of the most important dates in our calendar.

“On Anzac Day, I encourage Australians to take a moment and reflect on the brave men and women who have served our nation in all wars, conflicts and on peacekeeping operations,” Mr Sukkar said.

“I encourage everyone in Deakin to attend a service on Anzac Day or take time to pause, reflect and remember those who have served and those who have given their lives for our country.

“We are forever grateful to the men and women, past and present, who have served in our Army, Navy and Air Force.

“This year also marks the centenary of the Battle of Bullecourt in France, the Battle of Messines, the Battle of Polygon Wood and the Battle of Beersheeva, as well as the 75th anniversaries of the Fall of Singapore, the Bombing of Darwin and the Kokoda campaign — they are all important events from our history that this nation will never forget.

Mr Sukkar said any current or former Australian Defence Force personnel who was affected by Anzac Day should contact the Veterans and Veterans Families Counselling Service, which provides free and confidential counselling 24/7 on 1800 011 046.

Australians are invited to share how they mark Anzac Day on Facebook at www.facebook.com/AnzacCentenary, or on twitter.com/DVAAUS with #AnzacDay.

VVCS can be reached 24 hours a day across Australia for support and free and confidential counselling.

If you would like to connect to VVCS while overseas please call +61 8 8241 4546 (please note that standard international call costs will apply).