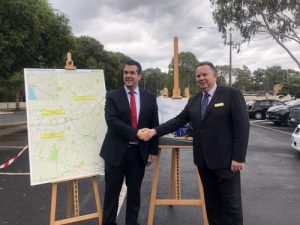 The Australian Government’s $1 billion Urban Congestion Fund will deliver an upgrade to Plymouth Road in Croydon, and build three commuter car parks at Croydon, Mitcham and Ringwood train stations as part of $261.3 million to be invested in projects across Victoria.

Federal Member for Deakin, Michael Sukkar, said work on these vital projects has commenced and would deliver improved pedestrian and commuter safety as well as reduce congestion around busy train stations.

“The Government is investing $2.5 million for upgrades to Plymouth Road to improve safety and reduce congestion. These upgrades will make school drop-offs and pick-ups safer for students and parents at local schools as well as take pressure off local roads around the McAdam Square Shopping Centre”.

Mr Sukkar said the Government would provide funding to build three multi-storey car parks at Mitcham, Ringwood and Croydon train stations. “I am proud to have secured funding for this critical infrastructure that will support our public transport system. Improving commuter access at our local train stations will reduce congestion on our roads and further encourage commuters onto public transport”.

“This investment and the broader Urban Congestion Fund are all about reducing travel times and vehicle operating costs, delivering a more reliable road network for commuters and freight, and supporting critical last-mile access to ports, airports, employment centres and freight hubs – where freight is most reliant on roads.”