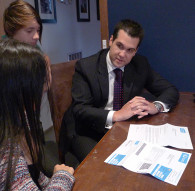 Families throughout Deakin are calling for a ‘fair go`, said Michael Sukkar, Liberal Candidate for Deakin, after visiting a family in Croydon this morning with Leader of the Opposition, the Hon. Tony Abbott MHR.

Olivia and Tom Juric, who have three daughters aged four years, three years and six months, welcomed Mr Abbott into their home for morning tea and shared their concerns about the rising cost of living, compounded by the Carbon Tax.

Mr Sukkar said the concerns raised by the Juric family reflected what he was hearing every day from families throughout the electorate.

“It was a pleasure to visit Olivia and Tom with Tony Abbott this morning. Their experience is representative of many families throughout Deakin. They are both working hard to raise a family but are finding it increasingly difficult to get ahead under this government,’’ he said.

Mrs Juric said her family’s concerns were shared by other Australian families.

“We explained to Tony Abbott that as a single-income family with three children it is not easy, and we don’t expect it to be, but we do want to get ahead a bit.

“Tony Abbott assured us that a Coalition Government would repeal the Carbon Tax and make it easier for working families, like us, to be able to get ahead and not be so worried about whether we can afford the bills.”
Mr Sukkar said the Coalition was committed to scrapping the Carbon Tax, which had driven up electricity and gas prices throughout the country.