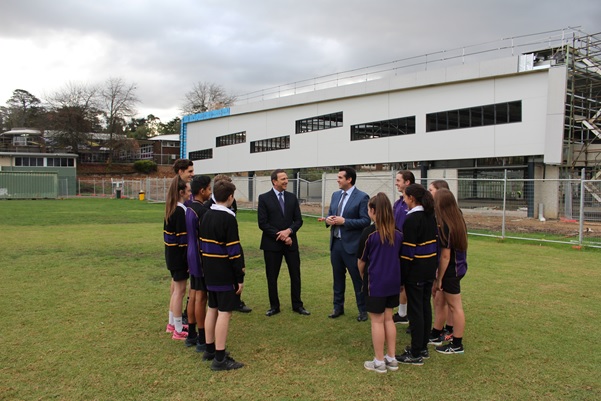 Mr Sukkar said that the new stadium is starting to take shape with the outside structure almost complete.

“The stadium will have two competition sized courts, new change rooms, spectator seating and multipurpose meeting and learning spaces for the school and clubs to use,” Mr Sukkar said.

“The $1.6 million investment from the Federal Government into Norwood Secondary College goes further than just another sports stadium – it will also allow the school, for the first time in its fifty-nine years, to hold its school assembly in the one place.

“The project is expected to finish before the end of the year and gives the students and clubs something to look forward to before semester four wraps up.”

Tim Mottin, President of the Ringwood Hawks said: “The new basketball stadium is great news for the Ringwood community and all the local teams – we really appreciate Michael’s support in delivering this project.”

Andrew Sloane, Principal of Norwood Secondary College said: “Students and teachers are all very excited for the new stadium which will be a great asset to the school.”