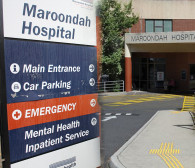 “Labor has ripped more than $8 million in funding from Eastern Health this financial year, affecting hospitals such as Maroondah and Box Hill. These heartless cuts are hurting the Deakin community and I fear that Maroondah Hospital could be forced to close beds, as we’re tragically seeing happen in other parts of Victoria,” Mr Sukkar said.

“Maroondah Hospital is at the heart of this community and I will be fighting everyday until the election to see that funding is restored to the hospital and patients do not suffer from reduced health services and blown-out waiting lists.”

“I am calling on the people of Deakin to join my fight against these health cuts. Today I started a petition that people can sign to urge the Gillard Labor Government to restore health funding to Victoria.”

The Labor Government’s mid-year Budget update, released last October, announced plans to cut $1.6 billion in health funding to the states over four years, including a $475 million cut in Victoria over that time.

The Federal Health Cuts petition can be signed on Saturday, February 2 at the East Ringwood Community Market, Railway Road, Ringwood East. It is also available online at www.facebook.com/MichaelSukkarLiberalForDeakin .