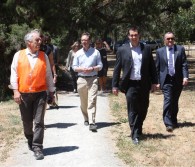 Young people would get to work improving Eastfield Park in Croydon under an environmental project proposed for the Coalition’s Green Army by Michael Sukkar, Liberal Candidate for Deakin.

Mr Sukkar said Eastfield Park was very popular with local residents and Maroondah Council had submitted a worthwhile proposal to improve the parkland, including extensive planting and the preservation of conservation areas.

“The Coalition has a strong track record of delivering on-the-ground projects like this one and, if elected, I will work hard to tackle environmental issues within Deakin,” he said.

“I am delighted that the Shadow Minister was able to visit the electorate, and in particular beautiful Eastfield Park, to discuss the Coalition’s Green Army.”

A Green Army of 15,000 young Australians will take on environmental projects to clean up our community under the Coalition’s Environment Plan.

Participants will receive a training wage and supervision. The Green Army will be comprised of teams of up to 10 people including a co-ordinator to tackle local environmental projects.

“Eastfield Park contains significant bushland and has the Tarralla Creek running through it. It is cared for by Maroondah Council with assistance from an active Committee of Management that includes local residents,” Mr Sukkar said.

“If the proposal is successful, a Green Army would work with both council and the committee to enhance the parkland.”
Proposed works for Eastfield Park include preserving conservation areas, identifying and erecting signage highlighting areas of significance, extensive planting, weed management and path improvement works.

Mr Sukkar said he was still seeking ideas from the community for worthwhile projects.

The Green Army will be a key part of the Coalition Government’s environment policy if elected, with successful projects to be announced ahead of this year’s election.