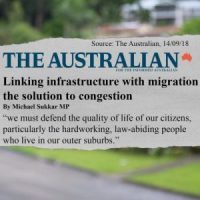 The Australian: Linking infrastructure with migration the solution to congestion

“The Roman Road is the greatest monument ever raised to human liberty by a noble and generous people … it joins city with city and nation with nation.”

The point by English historical novelist Robert Graves is as pertinent today as it was to the people of the ancient world. A country’s ability to be free and prosperous pivots on its connectivity: the ease with which one can travel within a city and from town to town.

Although Australian cities are quite large — Sydney, Melbourne and Brisbane would each rank among the five most populous cities in the US — they also have some of the lowest densities. This means developing transport systems is difficult and expensive.

The Australian Automobile Association puts the total economic cost of our road congestion at $16.5 billion.

While we rightly focus on the economic costs, we often disregard the more important issue, namely the social costs in terms of our quality of life.

In fact, these social costs are disproportionately borne by Australia’s modern version of Sir Robert Menzies’ “forgotten people”: those living in the outer suburbs of our large capital cities.

In Melbourne, Australia’s second most congested city, commuters spend on average an additional 34 minutes a day in traffic than they would in ideal conditions. Sydney remains Australia’s most congested city, with drivers spending on average an additional 41 minutes a day on the road. Considering New York City has a population almost double that of Sydney or Melbourne but commuters spend the same or less time in traffic (34 minutes), it’s clear our policymakers have failed us.

These average times are even higher for those in the outer suburbs. The additional 34 minutes a Melburnian spends in traffic may mean the difference between a parent reading a book to their child at bedtime and not seeing them at all that day.

This is a sad reality for many families in our modern society.

Many of these problems can be directly traced to the backlog in infrastructure in our major cities. This backlog can be attributed to successive state governments across the country, all the way back to the Wran Labor government in the late 1970s that sold off Sydney’s motorway reserves. Victoria had its own crazy moment in the 80s, when the Cain Labor government sold off the eastern section of a rail corridor to Doncaster and beyond.

Now we have the Andrews Labor government in Victoria which, on top of rejecting the federal government’s offer of $3 billion to build the East West Link, then spent $1.3bn of taxpayers’ money to cancel the project.

The issues are not confined to our road infrastructure. It’s getting more difficult by the year to find a parking spot at the local station, or a seat on a train or bus.

Of course, persistently high population growth has exacerbated this lack of long-term infrastructure planning and delivery.

Just 16 years ago, in the first Inter­generational Report, it was projected that Australia’s population would not reach 25 million until 2042. But, primarily due to immigration, Australia reached the 25 million mark last month. So far, our main strategy to cope has been to put more people into our suburbs, where roads are choked and public transport overcrowded.

As the son of a migrant from Lebanon, you won’t be surprised to hear me say that immigration has been overwhelmingly and unquestionably good for Australia — as well as for the migrants and their families who chose (often through adversity) to live here.

But we must defend the quality of life of our citizens, particularly the hardworking, law-abiding ­people who live in our outer ­suburbs.

It is clear that people in our suburban communities are concerned about the high rates of immigration into our busiest cities.

It is also clear that these issues will not be resolved by just telling them that immigration is important because it is good for the budget bottom line. It is therefore pleasing to see the Morrison government break from the past and appoint Alan Tudge as the Minister for Cities, Urban Infrastructure and Population.

In this capacity, Tudge can draw on his experience as the minister for citizenship.

He has made a very good start by emphasising the importance of better population distribution to take the pressure off our cities and suburbs.

But it would be wishful thinking to assume we can avoid the inevitable debate about Australia’s overall migration numbers.