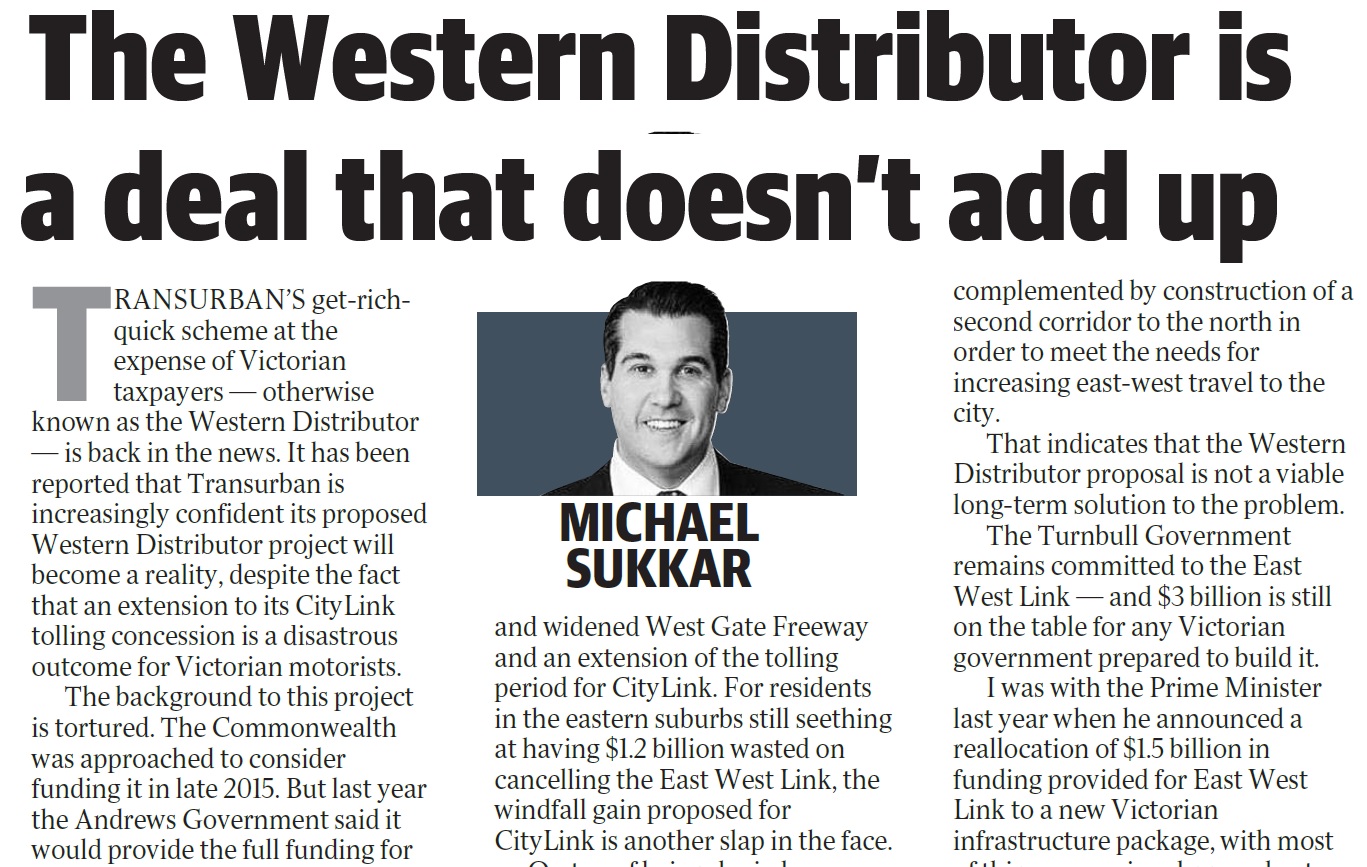 The Western Distributor is a deal that doesn’t add up

TRANSURBAN’S get-rich-quick scheme at the expense of Victorian taxpayers — otherwise known as the Western Distributor — is back in the news. It has been reported that Transurban is increasingly confident its proposed Western Distributor project will become a reality, despite the fact that an extension to its CityLink tolling concession is a disastrous outcome for Victorian motorists.

The background to this project is tortured. The Commonwealth was approached to consider funding it in late 2015. But last year the Andrews Government said it would provide the full funding for the Western Distributor.

Part of the cost of the project will be met by an allocation from the Victorian Government, but the rest is expected to be met through tolls on the Western Distributor and widened West Gate Freeway and an extension of the tolling period for CityLink. For residents in the eastern suburbs still seething at having $1.2 billion wasted on cancelling the East West Link, the windfall gain proposed for CityLink is another slap in the face.

On top of being denied an essential road link, they will have to pay more to use the network, tolls imposed to help fund a road — the Western Distributor — that provides little benefit to the east.

CityLink is one of the busiest roads in the country and is forecast to experience high growth in traffic volumes. Its revenues are expected to rise from about $600 million to $850 million by 2020. It is the most valuable asset in Transurban’s portfolio of toll roads. So delivering the Western Distributor, and, in turn, receiving an extension to the CityLink toll concession, is predicted to provide a boost to Transurban’s market value.

Analysis by transport actuary Ian Bell indicates that a 12-year extension to Transurban’s tolling concession on CityLink will generate $20-30 billion in additional toll revenue. The analysis reveals an investor would be willing to pay between $3.8 billion and $5.7 billion in 2022 for the rights to that extra toll revenue. That is considerably more than the Victorian taxpayer is getting in return. After all, the only thing Transurban is providing in return for this windfall is part-delivery of the Western Distributor.

As outlined in Senate estimates this week, the Department of Infrastructure has concerns about the proposal itself. These include the ability of the Western Distributor to deal with long-term east-west transport demands in Melbourne.

This should come as no surprise to those who have been following the debate, because these points are clearly flagged in the Western Distributor business case. This public document is the maypole around which the public debate must currently dance, as no peer review of it seems to be available.

The only thing Transurban is providing in return for its windfall is part-delivery of the Western Distributor.

The business case assesses the corridor options and indicates that, a decade after its construction, the Western Distributor will need to be complemented by construction of a second corridor to the north in order to meet the needs for increasing east-west travel to the city.

That indicates that the Western Distributor proposal is not a viable long-term solution to the problem.

The Turnbull Government remains committed to the East West Link — and $3 billion is still on the table for any Victorian government prepared to build it.

I was with the Prime Minister last year when he announced a reallocation of $1.5 billion in funding provided for East West Link to a new Victorian infrastructure package, with most of this money aimed squarely at addressing urban congestion.

This package included $500 million towards a billion-dollar upgrade of the Monash Freeway. Such a project would not only help unclog one of Melbourne’s most heavily congested road links, it would also improve safety and productivity in the city’s southeast.

The package also included a $350 million commitment to upgrading the M80 Ring Road. This upgrade will facilitate improved connections to the Port of Melbourne, Melbourne airport and interstate corridor.

The Turnbull Government remains engaged with Victoria on infrastructure. But the Andrews Government’s inability to solve congestion challenges and the extraordinary concessions it has handed Transurban suggests there are good reasons to doubt that it can strike a good deal for Victorians.