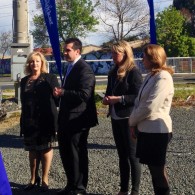 A Coalition Government would provide $1 million in funding for traffic lights at the intersection of Bedford Rd and Great Ryrie St in Ringwood, Liberal candidate for Deakin, Michael Sukkar announced today.

Mr Sukkar and Liberal Senator for Victoria, Helen Kroger, were joined by local traders and members of the community to make the funding announcement to address a massive issue for local residents for many years.

“I have been fighting for a long time to secure funding for this important local road upgrade and I am pleased to announce today that, if the Coalition is elected on September 7, we will invest $1 million in the project which will allow for the installation of traffic lights at the intersection of Bedford Rd and Great Ryrie St,” Michael Sukkar said.

“The Coalition has already committed $1.5 billion to build the East-West Link to ease congestion because we want Deakin families to spend more time together and less time stuck in traffic, as well as $500,000 toward a traffic black sport in Blackburn North. Today’s funding announcement reaffirms our plan to deliver modern infrastructure for the residents of Deakin.”

“As part of a united Coalition team, I am working hard to deliver crucial infrastructure projects that will improve the lives of the people living and working here in Deakin.”

Mr Sukkar said he had worked closely with local residents, businesses and Maroondah City Council to find a solution to fix the bottleneck at this intersection.

“This $1 million contribution for the project is a great result for our local community. Traffic lights will ease congestion and provide a safer environment for pedestrians and commuters walking to Ringwood Station and the bus depot,” he said.

“It will also create a safer neighbourhood for children attending local schools, including Ringwood Secondary College and Aquinas College, especially around drop-off and pick-up times.”

“Unlike Mike Symon and the Labor Government, I have a plan for improving local roads in Ringwood and beyond. I will continue to work with the community to deliver modern infrastructure if I am fortunate enough to be elected to represent Deakin.”